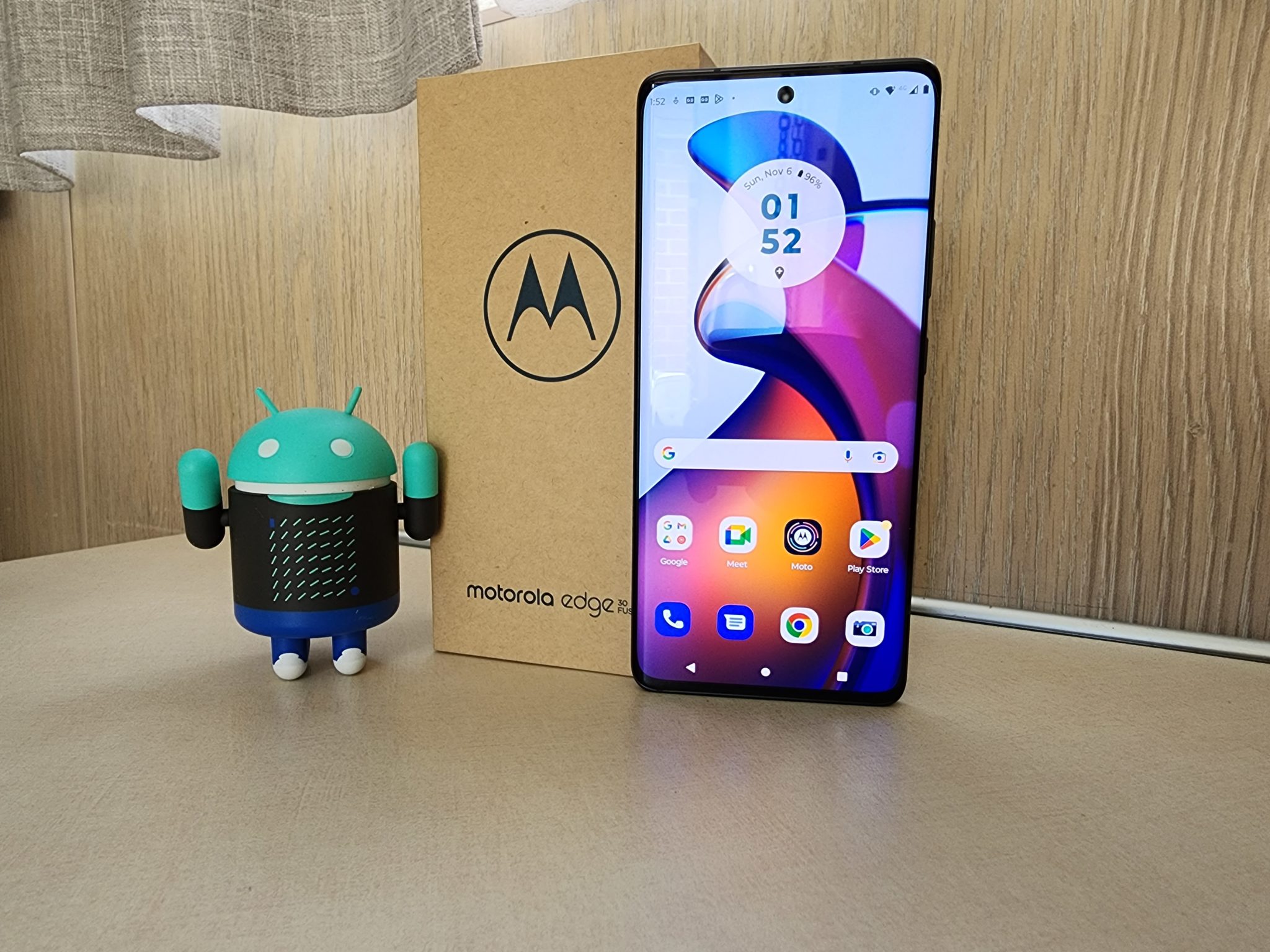 Motorola announced three new devices recently to its Edge lineup in Australia, and we recently reviewed the Moto Edge 30 Ultra, which is the high-end model of the latest lineup. Now now we have the second device, the Moto Edge 30 Fusion, a mid-range device that is looking to take on the Samsung Galaxy A series, Pixel A series and more.

What’s in the Box?

In the box, you get the device, a clear plastic phone cover which I think all phones should always come with and I congratulate Motorola on providing one. There’s a 1-metre USB-C to USB-C cable, 68W Fast charger, SIM ejector tool, wired earbuds and additional rubber ear tips and the usual paperwork. All about the Design

The Moto Edge 30 Fusion comes with a 6.55-inch Endless Edge Display (2400 x 1080 @ 402 PPI) that offers a 44Hz refresh rate and is housed in a 3D Corning Gorilla Glass 5 with anti-fingerprint coating. The side edges of the front curve off to each side.

The front display houses the 32 MP front-facing camera in a hole punch design near the top centre of the display. The front above the display houses a well-concealed speaker grill, and in terms of bezels, there’s little to discuss with the 1mm bezel around the sides, top and bottom; maximizing screen space.

The front display also houses the under-display fingerprint sensor, which is quite snappy most of the time. Unfortunately, I found that if there are smudges or dirt on the screen, the sensor can have some difficulty activating and scanning fingerprints. The rear of the Moto Edge 30 Fusion is made of a matte black polymer plastic design, and I for one actually like it to be a plastic polymer backing as it makes me worry less about breaking it. The casing does its best to hide fingerprint marks which is a bonus, unless your hands are sweaty or greasy.

The rear of the Moto Edge 30 Fusion houses the triple rear camera setup that is made up of a 50MP main camera lens, 13MP Ultrawide angle lens and a 2MP depth sensor alongside a single LED flashlight which is very strong and powerful. The cameras are in a raised square housing.

The Moto Edge 30 Fusion houses the triple rear camera setup that is made up of a 50MP main camera lens, 13MP Ultrawide angle lens and a 2MP depth sensor alongside a single LED flashlight which is very strong and powerful in a housing which I described above in a slightly raised square-ish oblong shape which raises 1-2mm above the rear plastic housing.

Pics taken with the rear camera set up do seem to be well balanced in colours, little to no fading or over or undersaturated in normal daylight. However in low light there was some noise and Butterscotch not so happy with the close up The Front facing camera is a 32MP sensor which is in a hole punch design on the top centre of the front display and does offer some great and flawless selfies in the right light, but in a more dimmer setting it can still produce some ok selfies but they do tend to have a bit of noise and the colour does seem to be off if not under saturated. The Motorola Edge 30 Fusion is powered by a Snapdragon 888+ 5G processor, 8GB RAM alongside 128GB of onboard storage, though sadly this cannot be expanded via MicroSD card, so you will need to ensure that you have some cloud storage available.

In terms of performance, I found the Snapdragon 888+5G processor was able to handle pretty much anything I threw at the device, with no stuttering or needing to restart the device if it began to slow down.

In terms of battery life, the Moto Edge 30 Fusion comes with a 4,400 mAh non-removable battery, which the company stated at launch can last a whole day. During review testing, The battery consistently lasted throughout the majority days, with battery power being at about 50-60% with medium to some high usage throughout the day.

Though I do suspect some higher usage via constant HDR video streaming or more gaming throughout the day could lead to you needing to find mains power to charge the device.

Disappointingly, there is no wireless charging with this device, so if your like or prefer this method of charging, especially overnight, then you will need to ensure you’ve got access to the 68W charger.

The Moto Edge 30 Fusion runs Android 12 right out of the box and it is close enough to stock Android but Motorola has added its own little touch through MyUX which enables you to personalise the device to your liking but also gives you gesture controls and always on display.

The Moto Edge 30 Fusion is also protected from malware, phishing, and other threats by the ThinkShield for mobile suite of features as well. It’s sort of similar to what Samsung offer through its Knox program which is installed on all its Galaxy devices.

Whilst reviewing the device there were two security patches available and installed, although no word was given on when Android 13 would be made available and given Motorola’s track record with major firmware updates being drawn out, it’s something worth considering.

Should you consider buying one?

The Moto Edge 30 Fusion does offer a lot of similar features and in some ways a similar experience to the Moto Edge 30 Ultra, which I reviewed a few weeks ago.

However, the lack of wireless charging, whilst not a deal breaker, would have been nice to have this inclusion. Coupled with some issues with the camera, given it’s not too bad with the results, the issues with low light can be a little disappointing.

The Moto Edge 30 Fusion is available in Cosmic Gray and Solar Gold at JB Hi-Fi , The Good Guys, Officeworks, Big W, Mobileciti and Lenovo.com for $899.

If you are happy with your present internet connection and want to switch to another one then have a halt...

Psychic chat readings are one of the fastest and easiest ways of carrying out psychic services. Thanks to the evolution...

Broadband USB Modems are utilized for accessing internet link wirelessly. The gadget is compact and can get over the flaws...

With the inception of broadband, the access to the Internet has become much easier and faster. This new trend of...

Where would we be without the internet today? Many of today's younger generations can't even remember what their lives were...

The Internet is the doorway for International multi-media, business, and communication therefore instant and convenient online access has become a...